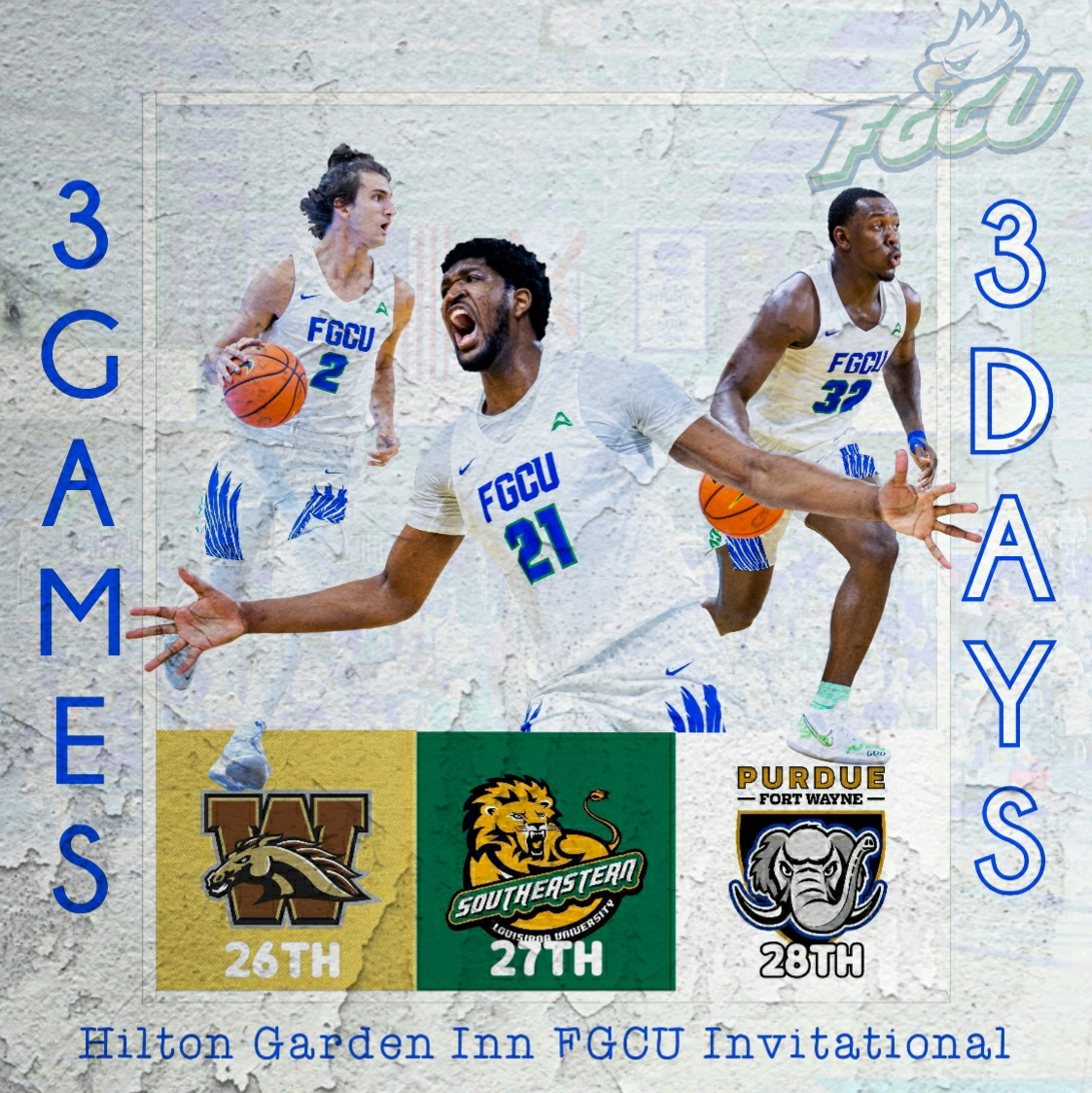 After a tone-setting win over A10 opponent, Rhode Island, FGCU’s arrow is pointing straight up. Entering the annual Thanksgiving, 3-game tournament, the Eagles have a chance to rack up a total of 5 wins in 8 days, should they sweep the competition. Over the 3 days of basketball taking place in Alico Arena, FGCU will square off against Western Michigan, Purdue Fort Wayne (IPFW), and Southeastern Louisiana. Below we break down each opponent heading into the tournament.

Western Michigan (MAC) enters the tournament with a 1-3 record, including 2 lopsided losses to Michigan State and Iowa. The Broncos’ roster is currently constructed with 6 freshmen, 3 sophomores, 3 juniors, and 2 seniors. They are led by 6’1″ / 175 lb junior, Lamar Norman. The Duquesne transfer (and former teammate of FGCU’s Tavian Dunn-Martin) is currently averaging 18 PPG on 46% shooting from beyond the arc. Eastern Illinois transfer, Mack Smith, has also been a strong addition for them. The 6’2″ / 210 lb senior guard holds averages of 10 points, 5 rebounds, and 2 assists per game. The other main contributor for the Broncos is the 6’7″ / 195 lb redshirt-sophomore forward, Markeese Hastings. The Butler transfer is currently averaging 7 points and 7 rebounds per game. Western Michigan is coached by long-time assistant, Clayton Bates, who is in his 2nd year at the helm. The Broncos’ have 6 players that are 6’7″ or taller, but none taller than 6’9″. Normally, this would be familiar to FGCU, who typically possess a similar size comparison. However, this is a game that I think Kevin Samuel’s 6’11” / 260 lb frame could be a huge difference maker.

* SLU will have played IPFW prior to their matchup with FGCU. Stats, insight, and info in the article could be different based on that *

Southeastern Louisiana currently sits at 3-2 with losses to Tulane (by 3 points) and SMU. The Lions’ roster is made up of 3 freshen, 4 sophomores, 5 juniors, and 3 seniors. They generally possess modest size, with the exception of a 7’2″ / 270 lb redshirt freshman, Max Brackmann. The Lions’ player contributions are very spread out, as they currently have 8 guys averaging 8 or more PPG. They are led by the versatile 6’6″ / 230 pound G/F, Gus Okafor. Through 5 games, the junior is averaging 14 points, 7 rebounds, almost 3 assists, and shooting 47% from beyond the arc. Next up is the 6’6″ / 200 lb senior forward, Jalyn Hinton. The transfer from DII Florida Southern has made an immediate impact for the Lions, averaging 13 points, 6 rebounds, 2 assists, and 2 blocks per game. Kansas State transfer, Antonio Gibson, has impressed so far as well. The 6’9″ / 215 lb sophomore is averaging about 10 points, 5 rebounds. 2 assists, and 2 steals. The last Lion we will mention is Keon Clergeot, due to his status as a former recruit of FGCU, per various websites and sources. Clergeot was a 3+ star recruit and ultimately chose UMass, before transferring to Southeastern Louisiana. Last season, he led the Lions with 16 points per game. This year, the 6’1″ / 190 lb senior is averaging 10 points and 3 assists through 5 games. SLU is led by David Kiefer, who is in his 3rd season in that role. Previously, he was an assistant there for several years. I think FGCU matches up well against this team with a major size advantage, even with the presence of Brackmann on the other side, based on typical minutes played. Both teams get excellent rebounding from their guards. This should be an interesting one to watch.

* IPFW will play SLU and Western Michigan prior to their matchup with FGCU. Stats, insight, and info in the article could be different based on that *

IPFW enters the tournament with a 2-1 record, including a win over Austin Peay and a loss to Minnesota. As presently constructed, the Mastodons’ roster has 5 freshmen, 2 sophomores, 2 juniors, and 6 players who are seniors/5th years/graduates. This highly experienced team is currently led by 5th year guard, Jalon Pipkins. The 6’4″ / 200 lb shot-maker is averaging 16 points and 5 rebounds, while shooting a scorching hot 59% from 3. Senior point guard Jared Godfrey has an impressive stat-line, with 14 points, 4 rebounds, and 4 assists per game. The 6’9″ / 245 lb forward, Ra Kpedi is their big man down low. So far he is averaging 11 points and 7 rebounds. The team is coached by Jon Coffman, who is in his 8th season in that role, after being an assistant there for 3 years. The Mastodons have a fair amount of size to match up with FGCU. I think this game is decided by guard play and which team is deeper/more conditioned, as this will be the 3rd game in 3 days for each team.

The Eagles are at an interesting and exciting point in their season. After competitive games against Loyola Chicago and USC that resulted in losses at the end of the day, FGCU found a way to get the win over Rhode Island. Now, the Eagles have a big opportunity to stack wins and keep building confidence and chemistry that will come in handy later in the season. The impressive depth of this FGCU team will be put to the test over these 3 days and could be the difference/advantage they need.